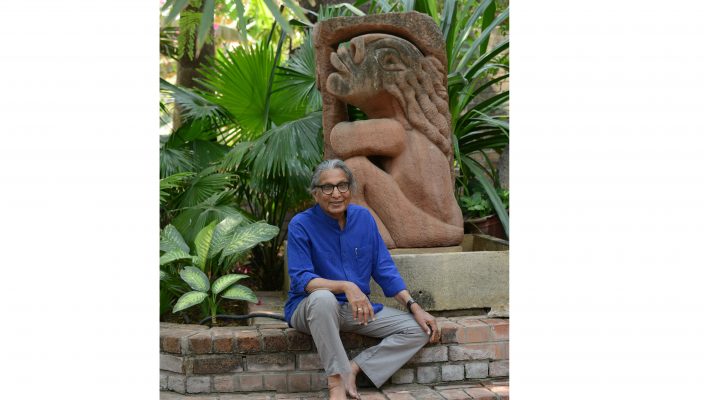 Balkrishna Doshi: “I searched for the soul of architecture”

Jun 2 • Reflexiones • 1435 Views • No hay comentarios en Balkrishna Doshi: “I searched for the soul of architecture”

Balkirshna Doshi has developed an architectural vocabulary compatible with India’s local culture, tradition, and transformations, stated the jury of the Pritzker Award 2018, handed over on May 16 in Toronto. This is his acceptance speech

Today, I am touched, moved and have no words to speak. When Martha called, she wanted to know whether I was well and willing to travel. Hearing my affirmative answer, she gave me the most unexpected news. I immediately announced the news of the Pritzker Prize to my family. A most unexpected and unusual gift for someone who has crossed ninety years. What can I say, a lifetime recognition for six decades of patient search – an encouragement to rediscover my inner calling.

For all this, how can I express my grateful thanks to the honourable Jury members and of course the Pritzker family. Particularly Cindy who with her late husband founded The Prize and Tom and Margot who continue to generously support it. Tom, please do accept my humble gratitude for giving me this most coveted award. Let me express my heartfelt thanks, Pranam.

Looking back, I have come to believe that my life over the years has been a long and rather unusual journey. A series of events have coalesced like drops of water that gradually became a spring, then a river, and then a part of many rivers. In the process, this journey traversed many lands, some open,
some confined.

There were times when the flow ebbed, even stopped, but those pauses gave rise to lakes, small and big. Then there came floods that rose above the banks and pulled me out of slumber.

However these journeys have helped me to answer innumerable questions. Just as the muddy waters of a river at the source clear up as it flows on one needs to integrate rather than fragment into small rivulets.

Visiting the Indian villages, towns and cities I noticed the undercurrent that shaped their formations based on the cyclic patterns of climate, work, customs and rituals as if a confluence of several other cultures expressing harmony, togetherness and sharing. . Thus I have gained insight and clarity such as the nature of fluidity in the formations of diverse characteristics and the nature of Indian architecture based on overall sustainability.

I also recognized that architecture is a backdrop, it proactivates life when in tune. It heightens all the events to their ultimate sensations such as light, space, form, structure, texture, colour, rhythm and heightens our skills and catalyses events and rituals.

The story of my life has been constantly absorbing, evolving, reflecting, changing, moving slowly becoming one again as if a calm river gushing slowly towards the unknown ocean. Suddenly I heard the inner voice, felt my impulse and from an art student I became an architectural student apprentice to my Guru Le Corbusier. Moving to India – my motherland and then to Ahmedabad I conceived, attempted and built from small houses to townships to public buildings to institutions such as School of Architecture and School of Planning with its open door philosophy. Yet the journey appeared incomplete – since the flow of my energy appeared incomplete without societal participation of the less privileged having witness their plight.

Consequentially I ventured from a single house to large housing complexes to towns to city planning moving and searching for the inner voice of the have-nots and trying to find alternative solutions and empowering them.

I searched for truth, independence and peaceful coexistence. With peace, togetherness, prosperity and harmony and a participatory built form I searched for the soul of architecture and its relevance to society at large rather than a stagnant small pond or a lake.

Suddenly a unique revelation appeared – thinking about Le Corbusier and Prof. Louis Kahn and their thoughts I recollected the memorable words of Mons. Le Corbusier “Pact with Nature”, twenty-four hours of the day towards creating, total harmony with both the tangible and the intangible. I realized his fundamental belief that truth never touches either of the banks since its goal is to reach and merge with the ocean the eternal truth.

Over sixty years of practice, I discovered that search is to amend disparities to finally merge the heterogeneous with the homogeneous. As a result I discovered my inclination to teach, to learn and question the real nature of the Habitat and its cause to celebrate life. This guided me to design the campuses with integrated interwoven in-between spaces, places and streets creating a whole new world.

Finally similar to our Hindu concept of the Trinity which depicts creation, preservation and reincarnation – Brahma the creator, Vishnu the preserver and Mahesh the Destroyer I too attempted to touch society at large and learned that time and energy is the real source. If I can redefine and touch this energy in all in my attempts in layouts, design of cells, clusters, neighbourhoods, may be I can reach the ocean of harmony, tolerance, togetherness, humility, forgiveness and co-operation.

And perhaps create a virtual trinity that we eternally see as mythical. May be in my attempt the myth of our ancient everlasting notion of trinity can materialize. And in all my diverse attempts I search and try.

Ninety years is a long time, but very short to attempt such a task and realise.

With all my humility and gratitude.